Can Anyone Make an NFT And Who Can Help You Make One? 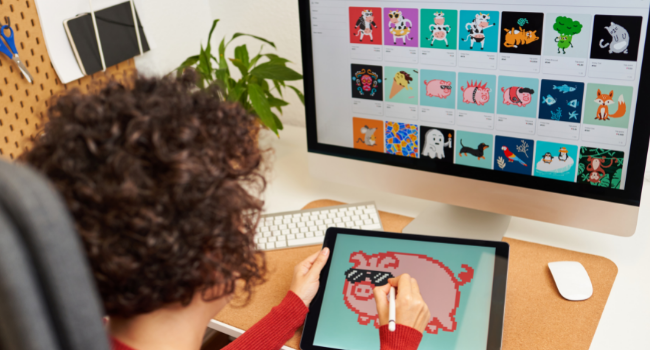 The 21st century has given us quite a number of inventions already, and we’re not even a quarter of the way in. Many of these inventions have the potential to completely change how we do certain things and to have a profound effect on how humanity adjusts to all the challenges that the 21st century seems to be throwing at us.

One of the most notable inventions so far this century has been blockchain. Blockchain as a revolution in data security. In essence, it is a chain of blocks containing data or records of transactions. Every block in the chain is linked to and derived from the block before it.

Every block carries a timestamp showing when it was created. The timestamp is what makes the block of data unique and secure. When any attempt is made to amend any data in a particular block, a new block will be created with the new timestamp. That new block will be linked back to the one where the change was attempted.

Blocks of data are distributed on a peer-to-peer network where all interested parties have access to the whole chain. Whenever a new block of data is created, every user in the chain is able to see it and block it or authorize it. This makes it next to impossible to make fraudulent changes to the blockchain.

What is an NFT?

One of the most exciting use cases for blockchain technology is the Non-Fungible Token (NFT). NFTs leverage off the security of blockchain. They’re a derivative of cryptocurrency coins, but they have some additional data that assigns a specific and unique purpose to them.

Although NFTs share the foundation of blockchain technology with cryptocurrency coins, they have one very different characteristic.  Cryptocurrencies are fungible. This means that all the coins of a particular currency have the same value and one coin can be swapped for another in an equal trade.

With NFTs this is not the case. Each NFT is unique, and the value is whatever a willing buyer and willing seller agree upon. If you swap one NFT for another, you will receive a different asset that may well have a different value. If you have two NFTs that represent images in a collection, then no two images will be the same, even though we may attribute the same monetary value to them.

Examples of NFTs are works of art, video or audio clips, proof of ownership of various types of property or sports trading cards and other memorabilia. The image, clip or ownership details are embedded in the NFT, and the timestamp authenticates it as the original. You may ask, “can anyone make an NFT?” Indeed, anyone can. Read on to see how.

Why did NFTs become so popular?

The origin of NFTs is said to date back to around 2012 when the concept of “Colored Coins” was first mooted. The colored coins, at that time, were regular bitcoins, but they were assigned with the additional characteristic of representing something of value. The original idea was that these coins would represent, among other things, digital collectible assets, securities, or real estate.

The first known NFT, as we know them today, was created by digital artist Kevin McCoy in May 2014. There was very little hype around this or any other NFTs for the next few years. In the background though, various projects were developing, and memes and trading cards began to appear. If someone ever asked, “can anyone make an NFT?”, then McCoy answered emphatically.

2017 saw an explosion in NFT trading when collections such as Rare Pepes, Cryptopunks, and Cryptokitties were launched. These are limited collections of memes or themed images that are bought and held or traded like sports trading cards. A craze developed where some of these tokens fetched ridiculous prices.

Sports NFTs first appeared in 2019 when the NBA, in conjunction with Dapper Labs, launched NBA Top Shot, an online platform for trading digital basketball cards. This paved the way for athletes and clubs across all sporting codes to create NFT collections. Sports NFTs are now abundant and very popular.

The defining moment, though, was on 11the March 2021. Mike Winkelmann, known as Beeple, auctioned off an image of his artwork titled The First 5,000 Days through Christies. The closing bid was just short of $70 million. This put the monetary potential of NFTs very firmly in the public eye. Suddenly everyone wanted to know, “can anyone make an NFT?”.

What are the most popular NFT projects today?

Arguably the most popular current project is Axie Infinity. This is an online game where people battle each other using digital creatures called Axies. Cumulative sales since the launch exceed $2 billion and the highest sales value in a single day was more than $40 million. More than 2 million people play the game on a daily basis.

Next in the popularity stakes is CryptoPunks. These tokens are 24 x 24-pixel avatars built on the Ethereum blockchain. There are only 10,000 in circulation and every one of them is unique. The cheapest Cryptopunk currently available to purchase is listed just under $150,000. Several other limited collections are also popular. These include Bored Ape Yacht Club, Mutant Ape Yacht Club and Cool Cats. The price of an individual token car run into the millions.

How can anyone make an NFT on their own?

Surprisingly, NFTs are easier to make than most people would think. Firstly, you need a digital wallet, and then you have to register an account on a platform where NFTs are traded. Many platforms facilitate the creation, or minting, of NFTs.

Creating an NFT attracts a fee. On the Ethereum blockchain, a network fee called Gas is charged for every token minted. Fortunately, this fee can be postponed and only becomes payable when the token is sold. In this way, you are able to include the fee in the selling price so that the buyer pays it.

Nexthash can help you get started

Through it NexInter platform, Nexthash offers an exchange for trading NFTs along with various cryptocurrencies. If you’re still wondering, “can anyone make an NFT”, Nexthash is your answer. Nexthash can assist you in creating your NFTs and will host your customized collection on the platform. Buyers have a range of payment options including various fiat currencies and a basket of cryptocurrencies.